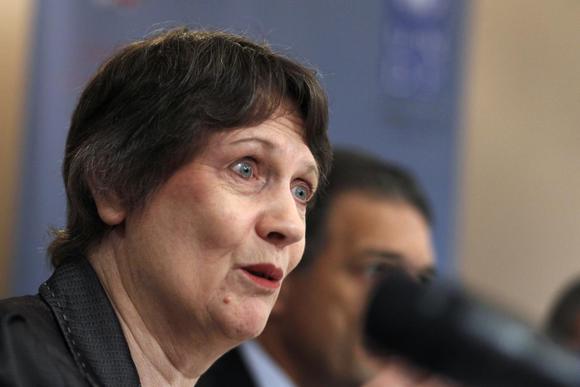 Helen Clark, head of the United Nations Development Programme (UNDP), speaks during a news conference after launching a report on ”Water Governance in the Arab Region” in Manama November 28, 2013 file photo.

(Reuters) – The U.N. Development Program warned in a report on Wednesday that income disparities in countries around the world have been worsening, posing new risks for global economic and political stability.

The UNDP warning echoes remarks from U.S. President Barack Obama in his annual State of the Union address on Tuesday, in which he said there was a widening gap between rich and poor in the world’s biggest economy and that while the stock market has soared, average U.S. wages have barely budged.

The UNDP says this is a global trend that, if left unchecked, could have dire consequences since it “can undermine the very foundations of development and social and domestic peace.”

The widening income gap comes as some major developing countries – such as China andIndia – have seen strong economic growth and an overall increase in national wealth. But that wealth has not been evenly distributed, which has contributed to greater inequality in those societies.

“The sharpest increases in income inequality have occurred in those developing countries that were especially successful in pursuing vigorous growth and managed, as a result, to graduate into higher income brackets,” the UNDP report said.

“Economic progress in these countries has not alleviated disparities, but rather exacerbated them,” it said.

In an interview with Reuters, UNDP chief Helen Clark made clear that this negative trend is reversible and that one of the key components is creating quality employment opportunities.

“The key thing is the focus on jobs – jobs, jobs, jobs,” Clark said, adding that it was important for governments to pay attention to ways of improving the skills of its labor force.

She also touched on the subject of the widening income disparities in countries like Chinaand India, which have seen significant levels of economic growth in recent decades.

“It’s the nature of the growth,” she said. “If it’s uneven growth … it does create tensions within society because people can see that others are doing much better than them.”

“The China example shows that you get fast growth and poverty reduction, but you also get the growing inequalities,” Clark said. “And this is of concern to China’s leadership.”

The report said there was evidence that increases in inequality over the last two decades were mainly due to trade and financial globalization processes that weakened the bargaining position of labor.

Clark said one of the problems with globalization is that it “has proceeded in a very deregulated world.” She advocates more regulation of international trade and financial flows but without eliminating risk and the ability of companies to generate profits.

The reasons for the decline are many, and the impact of the outbound migration is still felt today.

This week, The Saginaw News takes a look at those trends through the eyes of those who once lived in the city, and some who still do today. The series of reports titled “I used to live here” talks to citizens about what they’ve witnessed during the past few decades in the neighborhoods they’ve called home.

Experts also weigh in on what happened and what the future may hold for the city as it reshapes itself for the new century.

‘It’s not just a Saginaw thing’

Long before Saginaw’s decline came a period of unfettered growth, from a city of about 50,000 people in 1910 to its population height in 1960. In 1968, Saginaw was one of the 10 cities chosen as an “All-America City” by the National Civic League.

“The American population grew at a very high rate during that time period,” Branch said. “It was the growth of manufacturing, particularly automotive and its spinoffs. There were a number of different factors, but the main one for Saginaw was that GM had jobs here.”

Evelyn Ravuri, a professor of geography at Saginaw Valley State University, specializes in a field called “population geography,” which focuses on the distribution, composition, migration and growth of populations.

Ravuri said Saginaw’s more recent population decline, like its growth, is by no means unique to this city.

“It wasn’t so much people running away as it was they had tremendous incentives to move away.” -Former Mayor Greg Branch

“In the 1970s and ’80s, we start to see a decline in manufacturing, and those jobs start to trickle out of the state,” she said. “And then the supporting industries start to go also. So you start seeing a decline in the population.”

Ravuri said a migration also took place from metropolitan areas across the nation: A departure of baby boomers from cities and into surrounding suburbs.

“This is not just a Saginaw thing,” she said. “That’s been going on for several decades.”

According to the U.S. Census Bureau, in 1950, 61 percent of the residents in Saginaw County lived in cities, with about 39 percent in townships and villages.

Sixty years later, the opposite is true.

While 29 percent of Saginaw County residents still lived in cities in 2010, the vast majority (71 percent) live in outlying townships and villages. Cities in Saginaw County are the cities of Saginaw, Frankenmuth and Zilwaukee.

“Population spread” into outlying areas hit places like Saginaw harder than large metropolitan areas, such as Boston and San Francisco, because of the availability of undeveloped rural land close to Saginaw’s city center, Ravuri explained.

Branch said federal housing policy encouraged the shift the to the suburbs in the 1950s and ’60s, often referred to as “white flight.”

“It wasn’t so much people running away as it was they had tremendous incentives to move away,” Branch said.

He explained that the now-illegal process of “redlining” certain neighborhoods to discourage investment was, at the time, both legal and commonplace. At the same time, Branch said, attractive loans were available to some who were interested in moving into the suburban developments popping up outside city limits.

The start of the departure of residents from Saginaw, Branch said, can be blamed on those incentives, coupled with racial tensions reaching a crescendo in the 1960s and the bisection of Saginaw by the construction of Interstate 675.

“You have this huge swath of land cutting right through the main part of the city,” Branch said.

“My dad’s stepmother, my grandfather’s widow, lived in a house on North Michigan in the last block before Weiss. The berm for 675 is where their yard was. They bought her house, and what did she do? She moved out to the township. And a lot of people did that.

“That project alone is probably responsible for the loss of several thousand homeowners.”

While the city of Saginaw’s population has plummeted since 1960. During the same period, the population of neighboring Saginaw Township has doubled.
Source: U.S. Census Bureau

Construction of the nearly 8-mile-long interstate business route began in 1969 and it was opened to traffic in 1971.

Branch also acknowledged the city’s failure to annex portions of the surrounding townships as the population spread. The city sold those areas its water.

“I would say that was the biggest mistake that we made,” Branch said. “That suburban growth was on the back of our water system.”

“And right on the heels of that, you have the Arab oil crisis, the rise of the Japanese auto industry and, really, the beginning of the loss of GM jobs,” he said. “It’s kind of like you had all these different things coming together.”

At the same time that the city of Saginaw rapidly lost residents, many of the surrounding townships were growing.

The above charts show the dramatic shift in the concentration of city dwellers versus people living in outlying townships and villages in Saginaw County in 1950 and 2010.Source: U.S. Census Bureau

The migration from city to suburbs has had financial consequences for Saginaw, including significant implications on the city’s ability to provide services and maintain infrastructure.

The total assessed value of the city’s taxable property has fallen from nearly $760 million in 2002 to about $610 million in 2011, roughly a 20 percent decrease.

Saginaw’s city government has downsized, staffing 345 full-time and 88 part-time positions in the current fiscal year. Five years ago, the city had 466 full-time workers.

But it’s not all bad news for a city full of people with a passion for their hometown and its rich heritage as both an important supplier of lumber and as an industrial and manufacturing hub.

Unlike many Midwest cities that invested heavily in the automotive industry, Saginaw’s city government has not yet approached the edge of bankruptcy. Though Saginaw’s expenses are rising and its savings dwindling, city leaders still make final administrative and budgetary decisions, unlike its neighbors along the Interstate 75 corridor that are run by a state-appointed emergency manager.

With a brand new outdoor event venue built in downtown Saginaw in 2013, new residential housing being developed in the city and the prospect of a Central Michigan University Medical School campus on both sides of the Saginaw River opening in 2015, many watching the news are hopeful a new era of growth lies ahead.

Ravuri said that some experts are predicting a revival of metropolitan areas, though she pointed out that it’s unclear if that growth trend might appear in Saginaw.

“It really depends on what those baby boomers are going to do,” she said. “They could delay it if they continue to move out into suburbs. But if they decide to move back into cities, you’ll see it going a lot faster.”

City and county leaders are attempting to make room for potential growth and to stabilize remaining neighborhoods. Hundreds of vacant, blighted properties dot Saginaw. Thanks to $11.2 million in federal grant dollars secured in 2013, officials plan to demolish about 950 of the empty, dilapidated homes.

That amounts to about 5 percent of all of the houses in Saginaw. City officials estimate there are another 1,000 blighted homes that still should be demolished.

The homes were once in tightly knit neighborhoods, say people from all walks of life who claim Saginaw as their hometown. Read some of their stories this week in the series “I used to live here.”

Use our searchable database below to explore information on the county-owned properties already slated for demolition as part of the federal grant. Crews have already begun demolishing some of the 413 publicly-owned properties in the database and hope to acquire another 500-some privately-owned empty, blighted homes to demolish.

Link to the story.

This widget sheds light on the UNEVEN DEVELOPMENT that exists across the globe. ECONOMIC INEQUITY is but one of the economic indicators that illustrates the DEVELOPMENT GAP. With little EXPENDABLE INCOME, less developed and developing countries do not draw in the QUATERNARY service sector that more developed countries do.

“Data has been sourced from the International Labour Organization, the U.S. CEO earnings figure was sourced from theBureau of Labor Statistics and the Queen’s income from The Sovereign Grant. *$PPP wages calculate the buying power of what you earn, inside your country, relative to someone in the U.S. Find out more about how this interactive was calculatedhere. **Iraq and Timor-Leste are net.”