Does the Berlin Wall still exist?

If you are wondering whether the two halves of Germany are becoming truly one nearly a quarter of a century after the country was officially unified, just have a look at the map of voting patterns in Berlin. 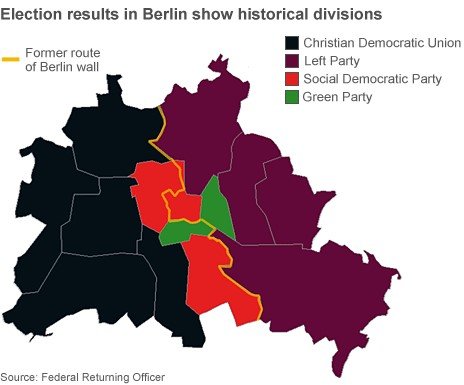 The picture is stark: the former route of the Berlin Wall divides the city into voting choices. In the constituencies of the East, voters chose Die Linke (The Left party), descended from the old communist party.

In the West, they voted for the Social Democrats and the Christian Democrats (CDU), both formerly West German parties.

In a few locales in the centre of Berlin, on either side of what was the Wall, the Greens came out on top – and closer examination reveals these to be areas which have been gentrified heavily, with large numbers of young, professional incomers.

The map only takes account of votes in constituencies. Germans had two votes – one for a local candidate and a second for the party nationally. The geographic split of the second vote is not known, but the first vote reveals that old divisions run deep.

Perhaps we should not be surprised that voting habits have not changed much. After all, apart from the gentrifying areas in the centre, populations have probably remained much the same as they were before the fall of the Wall.

There was no great cross-border migration in the city after 1989. People had security of tenure in their flats, and they stayed put. Berlin had a large concentration of members of the Socialist Unity Party (as the communist party in East Germany was called), as well as the civil servants and Stasi operatives who kept the communist state running, and they have remained in their areas and transferred their loyalty to Die Linke.

But a close look does reveal a more complicated pattern. In lots of the areas of East Berlin which voted in greatest numbers for Die Linke, the second choice was the CDU. The areas of the East in the city do not gravitate towards the Social Democrats. They are torn between the far-left and the centre-right.

It gets even more interesting if you look at a map of the whole of Germany. It shows that East Germans voted in large numbers for Chancellor Merkel’s party, perhaps out of loyalty to her. 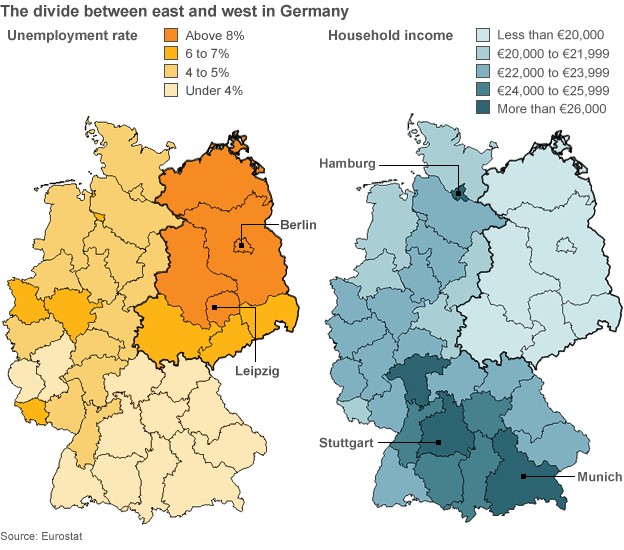 The areas where the SPD triumphed were some of the old industrialised cities of the West (Duesseldorf, Dortmund, Essen, Hamburg, Bremen).

via BBC News – Does the Berlin Wall still exist?.